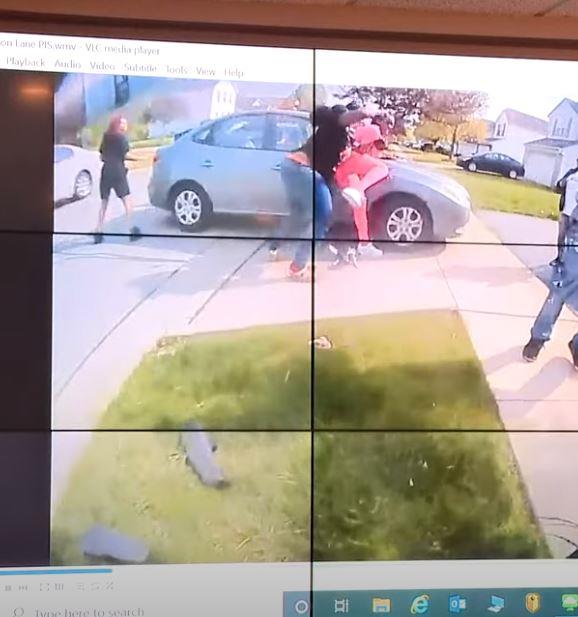 We don't side with law enforcement very often, but when we see a knife wielding maniac trying to stab someone we support shooting that person. That is what the body camera footage released by the Columbus Police Department shows. We have embedded the video below. The footage is played at full speed and then in slow motion. The slow motion footage makes it obvious that the deceased had a knife in her hand and was trying to stab someone when the officer opened fire literally at the last second before she would have stabbed the other person.

Could he have tried using a taser? Sure, he could have tried that and maybe he should have tased her right away when he first noticed the knife, but at the time of the shooting he had to choose between letting someone get stabbed and shooting a knife wielding maniac. Tasers malfunction a lot, so there was a good chance that a taser would not have been sufficient. Tasers frequently fail hit their target with both prongs and when that happens they hardly feel a thing.

The knife wielding maniac has been identified as 15 year old Ma'Khia Bryant. Some reports say she was 16.

Attorney Ben Crump, George Floyd's family's lawyer, was quick to take to Twitter and politicize this as a racial justice issue (https://twitter.com/AttorneyCrump/status/1384667861642358785). It did after all happen the same day that Derek Chauvin was convicted of murder for killing George Floyd. Black kids are unjustly killed by police on a regular basis in this country, so Crump's assumption was not without cause. However, the video clearly shows that the officer acted at the last second before the deceased would have most likely stabbed and possibly killed another person.

This is not the first time we have sided with officers in a case involving a knife wielding maniac. Last year we sided with police in the shooting death of Ricardo Munoz (https://copblaster.com/blast/25964/ricardo-munoz-shot-by-police-in-lancaster-protest-mostly-peaceful). In that case a knife wielding man chased an officer who could have shot him at first, but tried to run away and after Munoz started to catch up he shot him. We don't care what your occupation is or what color you are, if a knife wielding maniac is about to stab someone you have the right to shoot'em.
#makhiabryant #bencrump #georgefloyd #derekchauvin

Cardi B Traumatized, Sick Of Police Brutality After Seeing Video Of 13-Year-Old Being Shot