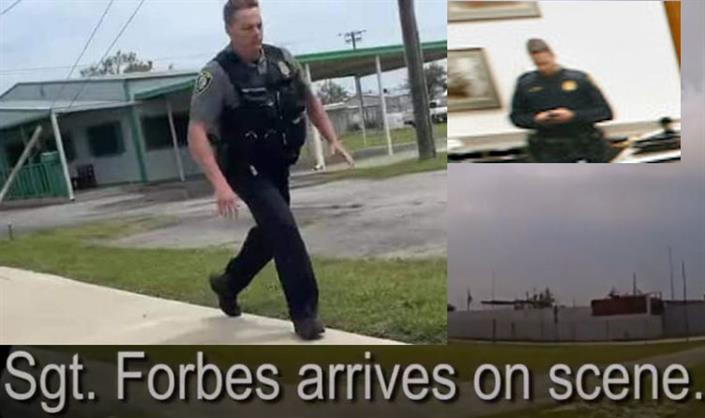 We received a request via Twitter today seeking help identifying the Oklahoma City Police officer that arrested Floyd Wallace Jr. yesterday. We have narrowed the possibilities down to two people by reviewing videos, searching public records, and searching the internet. Those two people are Sgt. Yancy Walt Forbes and Sgt. Ezra Boone Forbes. At this time we think that the one involved is probably Yancy Forbes, but we would like hold off on making a conclusion until we see more evidence.

The official body camera footage released by the OKCPD is embedded below this article. It begins with footage from the body camera of Sgt. Miller (badge number 1582). Sgt. Miller talks to Wallace for a few minutes. At 6:15 the text "Sgt. Forbes arrives on scene" appears on the bottom of the screen and you can see a second officer approaching. The point of view then changes to Sgt. Forbes' body camera. From that we can conclude that the officer in question is a sergeant with the last name Forbes. We searched online payroll records for OKCPD personnel named Forbes and found two results listed as OKCPD sergeants (https://govsalaries.com/salaries/OK/city-of-oklahoma-city?employee=forbes).

When searching the internet we found a 2013 article about worker's compensation mentioning Yancy Forbes (https://www.oklahoman.com/article/3758523/injured-workers-in-oklahoma-seek-compensation-in-adversarial-system). It says that Forbes had torn his rotator cuff struggling with a suspect and expected to work for at least 15 more years. It also says that he was waiting to see a judge while wearing his uniform. One picture captured Forbes from a distance. We think the individual in that photo bears a striking resemblance to the man in the video, but cannot say for sure that it is the same person.

Public records reveal that Yancy Forbes is a 47 year old Republican living in Ninnekah. We found several email addresses that could be linked to him. Those addresses are yancyforbes[at]gmail.com, yancy.forbes[at]gmail.com, yancy.forbes[at[netscape.net, and yforbes[at]msn.com. We are listing those only because we think they could be useful for people seeking answers in this case. We also have a residential address, but we are not publishing it at this time because we don't consider this incident serious enough to warrant that.

Public records reveal that Ezra Forbes is a 35 year old Democrat living in Yukon. We found email addresses and social media profiles that might be linked to him. The email address ez_stick[at]hotmail.com is linked to this LinkedIn account (https://www.linkedin.com/in/ezra-forbes-80253857/) which he appears to have abandoned in 2013 shortly before his name was added to the OKCPD pension program (see PDF icon above this article). We have a residential address for home, but are not publishing it for the same reason we are not publishing the other Forbes' address at this time.

Based on this information we think that the officer in the video is probably Yancy Forbes, but cannot say for sure. A photo of Ezra Forbes would be extremely useful in this case. Right now we believe that the officer identified as Yancy Forbes in the 2013 article about workers compensation could be the same person in the Floyd Wallace video. Every look we get at the video is low resolution and without a good close up, so guessing his age is difficult. Judging by his build, hairline, and gait we think he is a middle aged male more likely to be in his 40s than his 30s. On the other hand men in their late 40s typically have graying hair and we do not see any graying hair in this video.

Is This Arrest Justified?

We don't think that Floyd Wallace Jr. did anything to justify bothering him in the manner that he was bothered. They say they got a 911 call of some guy lurking in the bushes near a jail, but a call like that doesn't prove anything. When they arrived he was just walking down the sidewalk. He never did anything indicating intent to commit a crime. The officers did have every right to tell him not to trespass on jail property, but treating him like a suspect was inappropriate. They should have just said something like "hey man, just so you know, we got a complaint about someone in the bushes at the jail, you can't go there." That would have been sufficient to inform anyone in the area that they are not allowed to trespass on jail property. At that point they should have just left Wallace alone. He had every right to stand on the sidewalk, scratch his back, put his hands in his pockets, and argue.

To Forbes' credit, Wallace does get really close to him the moment before he is shoved, taken to the ground, and arrested. Forbes can certainly argue that Wallace was uncomfortably and annoyingly close, but at that point Wallace's behavior would indicate to a reasonable person that he was just filming the officers. He was basically giving them a First Amendment Audit which they failed miserably.

We suspect that this Floyd Wallace Jr. might be the same Floyd Wallace who was featured in The New York Times earlier this month for his work with Omaha Cop Watch (https://www.nwitimes.com/news/local/crime-and-courts/watch-now-sheriff-defends-arrest-of-first-amendment-auditor-who-said-his-rights-were-violated/article_e7438112-b4fb-5175-9b22-3dff00c0c4d9.html). That article described a black man standing on a sidewalk filming police officers and talking to them in a similar way. Those cops arrested him for refusing to identify himself. We think he went to Oklahoma City to do the same thing. #yancyforbes #ezraforbes #floydwallace #freespeech