Mistrust with police major driver of gun violence in US …

Who will head SF’s police union? A run-off election will …

Dr. King dreamed of a world without police brutality The …

In a first, off-duty Hong Kong police officer arrested for …

Bogota’s anti-police brutality protocol put to the test on …

Police being allowed to get away with murder — report …

Murder charge may be added for police brutality suspects …

The firings of police officers continue over the Parkland Massacre – who is next?

After Jamia, AMU to file complaint against police for …

Police brutality in The Bahamas – The Nassau Guardian

May move court seeking FIR against Delhi Police over …

Moses Kuria arrest: Top lawyers take on each other over …

Dennis Itumbi claims he was beaten by 18 police officers …

Abhay Deol has the most unique and audacious take on the …

By PoliceBlunder December 31, 2019 No Comments 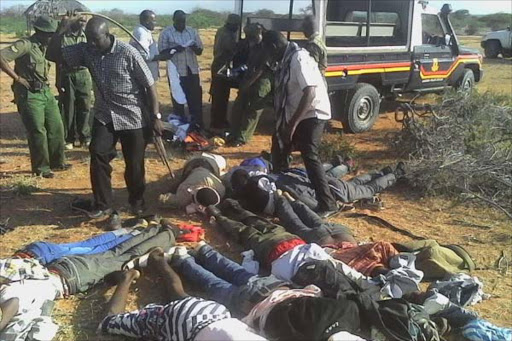 Police brutality, extrajudicial executions and forced disappearances were still rife in 2019 despite the heavy state investment in reforming the police service.

Missing Voices — a website that documents cases of police brutality — 82 people were killed or disappeared in 2019 and police were accused of playing a role.

The site says the figure is the highest since 2007.

The website was founded by human rights watch groups that monitor police and security operations and advocate for fair and rights-based policing.

According to the website, 550 cases of forced disappearance and police killings have been recorded since 2007. Last year 75 people were killed or disappeared at the hand of law enforcement officers, it says.

Of the recorded cases, 52 per cent arose from shootings, including crime, torture and tear-gassing, the site says.

Further, according to a report by the Independent Medico-Legal Unit released in October, 78 people were killed countrywide in police operations between January and September 2019.

Most of the cases took place in informal settlements. Police were also involved in harassment, extortion, brutality and injuries, according to IMLU.

The report seen by the Star shows that 59 of the deaths were summary executions while 13 were committed in self-defence. The report does not give the details of six deaths.

The IMLU numbers show a decline in extrajudicial executions in the last five years.

Its monthly breakdown shows that the highest numbers of extrajudicial killings happened in April and September, at 13 each. February and June had 11 cases while eight were reported in August. January had five cases while July and May had four each.

According to the lobby, Nairobi bore the brunt of the killings with 28 cases, followed by Kiambu at 10 killings, Mombasa (eight), Embu (five), Tana River (four) and Kisumu, Murang’a and Nyandarua with three each.

One of the cases detailed by Missing Voices in Nairobi is that of Kevin Gitau, 25, a fruit vendor gunned down on April 14.

“[He] was shot at around 9pm in Oilbya at Mathare allegedly by Ahmed Rashid,” the site claims.

Rashid is an infamous killer cop with various Facebook fan pages in which he warns suspected criminals to reform or leave — or they die. He publishes photos. Rashid and other killers are variously known as Hessy wa Kayole, Hessy wa Dandora and other names. Some Facebook pages have been shut down.

“His mother said Kevin had previously been arrested on February 1 by officers from Pangani police station led by Rashid and was released after a social media campaign. After his first arrest, he continued to receive threats from Rashid. A report was made at Ipoa and they referred him to report at the police station. Pangani and Huruma police stations refused to record the complaint and the family decided to relocate Kevin instead. Kevin was killed before the relocation plans were finalised,” it says

The other case was that of Dominic Oyugi allegedly shot by an officer in Kisii on April 11.

It is claimed that he died from two gunshot wounds to the stomach when he tried to shield a woman at whom the accused officer aimed.

“It was reported that [the officer] attempted to shoot a female bartender, however, the deceased shielded her and [got] shot hit twice in the stomach instead,” the site says.

The data released by IMLU in October, it said, were compiled from print and electronic media reports and from its network of monitors.

It says the numbers could be higher as victims of excessive police force report to police stations and not to NGOs.

Police brutality has particularly been on public display when responding to protests classified as riots.