By PoliceBlunder January 9, 2020 No Comments 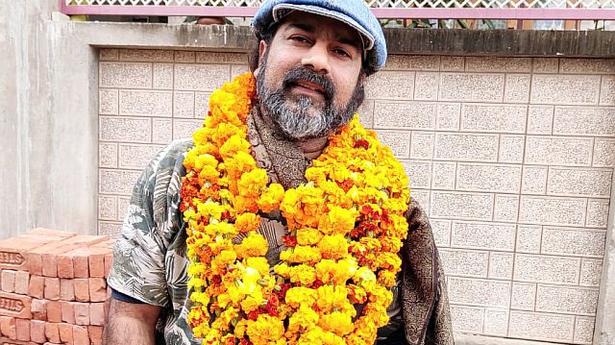 Theatre actor and cultural activist from Lucknow Deepak Kabir on Thursday alleged that Uttar Pradesh police not only brutally thrashed and abused him in custody but also labelled him an “urban naxal.”

The term ‘urban naxal’, used by right-wing groups and activists and popularised by the leaders of the ruling party BJP, is evoked to link activists and academicians critical of the government to the Naxals.

Mr. Kabir, 44, was released from the Lucknow district jail after a local court granted him bail in connection with the violence in the State capital during the protest against the Citizenship (Amendment) Act on December 19, 2019.

He was arrested by police on December 20 when he had allegedly gone to the Hazratganj police station to inquire about the whereabouts of his activist friends after they had been picked up by police following the protests.

Mr. Kabir told The Hindu that the SHO of Hazratganj first snatched his phone, threw off his cap and dubbed him a “mastermind” of the violence. “He said, ‘you are a krantikari (revolutionary), right…’ Mr. Kabir recalled, adding that his submission that he had come to the police station on his own will to look for his friends fell on deaf ears.

Following this, around 12-15 policemen escorted him to a hall and took turns to beat him with batons and their arms and was kicked for at least 10 minutes, Mr. Kabir alleged. “The SHO told them to tie my hands and legs and beat me as much as they can,” he said.

Mr. Kabir said his ordeal did not end there. After getting a medical examination done at a local hospital, he was thrashed again on the orders of a senior police officer, he alleged.

This time, four policemen caught hold of him while a fifth incessantly hit him with a baton, he claimed. “They were told to hit me till they got tired,” Mr. Kabir recalled.

“He (district police chief) said, beat them so much that they can’t sit for months and make sure there is a 1.5 -2 inch swelling [on their buttocks],” he said.

The policemen also tried to undress him to thrash him but could not after he resisted, he alleged.

Commenting on Mr. Kabir’s dishevelled hair — he keeps his hair long — a police officer told him “such hairstyle is kept by communists,” he said. “ These are urban naxals, prepare a list (of urban naxals),” Mr. Kabir said, recalling the police officer’s orders to his subordinates.

After spending almost three weeks in police custody and jail, Mr. Kabir, who organises the Kabir Festival, named after the Sufi mystic, every year in Lucknow, is shocked by the police action.

“I can understand them hitting somebody picked up from the scene…they can have a doubt that he or she may be involved in the violence,” Mr. Kabir said. “But the next day, when someone is going to the police station…then we can see what kind of hate and revenge this is,” he said.

The cultural activist said he became numb and was unable to think due to the physical pain.

“I closed my ears and eyes so that I don’t feel anything,” he said.

Pakistan Police Brutality Video Passed Off As UP Police

Pakistan Police Brutality Video Passed Off As UP Police