No Justification For Police Brutality Against Persons … 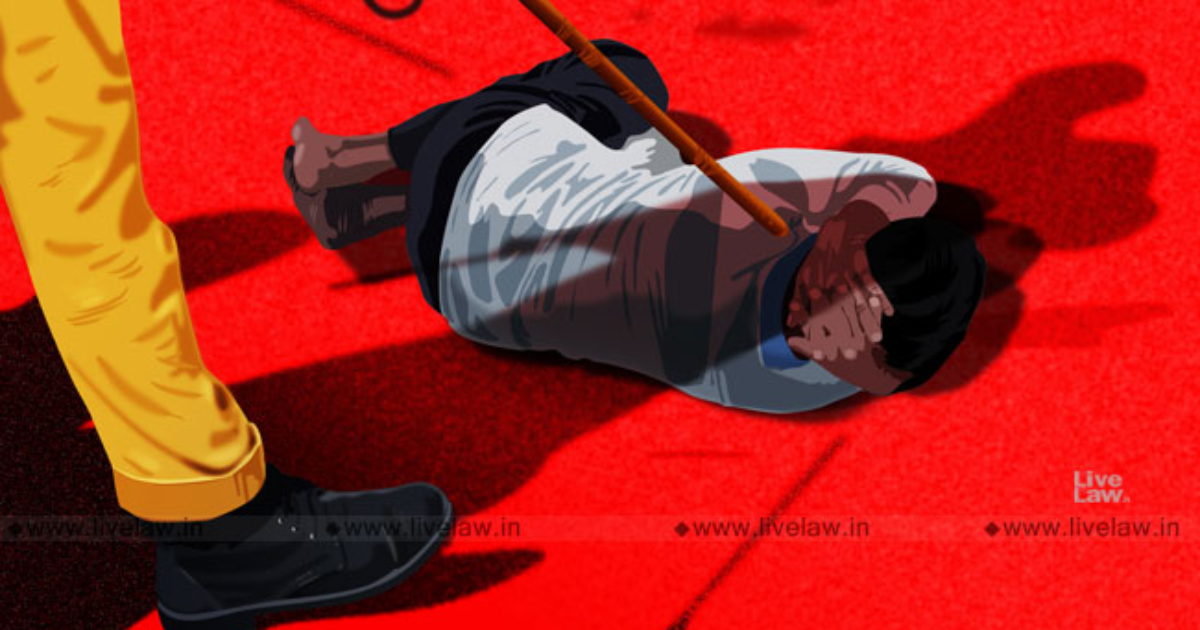 On 24th March, a nationwide lockdown was announced by Prime Minister Narendra Modi in order to contain the spread of the Coronavirus outbreak (COVID-19). The lockdown was imposed pursuant to the order issued by the National Disaster Management Authority for the strict implementation of a curfew for a period of 21 days with effect from 25.03.2020.

Subsequently, Guidelines were issued by the Ministry of Home Affairs on measures taken for the containment and these Guidelines categorically exempt “essential services” from the lockdown. These services include “Shops, including rations shops (under PDS), dealing with food, groceries, fruits and vegetables, dairy and milk booths, meat and fish, animal fodder”. It also further includes the delivery of these essential goods through e-commerce. Enforcement authorities have been directed to impose restrictions only on the movement of people, “but not to that of essential goods”.

However, since the announcement, numerous videos have surfaced on social media platforms, showcasing incidents of police brutality being inflicted on persons who are violating the lockdown. The violence ranges from making the violators crawl on the road to viciously employing lathi charge against them. In one particular case in West Bengal, a man died after being beaten up by the police as he had stepped out to buy milk during the lockdown.

The MHA Guidelines stipulate the statutory provisions which can be invoked for the smooth implementation of the lockdown:

“Any person violating these containment measures will be liable to be proceeded against as per the provisions of Section 51 to 60 of the Disaster Management Act, 2005, besides legal action under Section 188 of the Indian Penal Code.”

While a bare perusal of provisions under DMA, 2005 enumerates the maximum punishment to be that of imprisonment for a period of 2 years with fine, Section 188 of the IPC prescribes a maximum punishment of Simple Imprisonment for a period of 6 months or a fine of Rs. 1000, or both. Read with the First Schedule of the Code of Criminal Procedure, 1973, offences under Section 188 of the IPC are cognizable, bailable, and can be tried by any Magistrate.

The Explanation to Section 188 fixes liability on the offender if she or he has knowledge of the order given by the public servant which is being disobeyed. In this case, as the news of the lockdown has been widely disseminated, it would be incredible to raise the defence of ignorance.

Violation of Section 188 does not authorize police officers to inflict physical damage on a person. At the most, the police have the authority to detain an individual for failure of adherence of the lockdown order, and the offender has right to be released on bail, the offence being bailable. It is also to be noted that criminal court cannot proceed against a person under this offence on the basis of a final report, unlike many other offences. A complaint in writing by the authorized public servant is necessary for the criminal court to take cognizance of an offence under this Section (Section 195 of CrPC_.

The videos and the accounts which have cropped up, depicting violent measures being employed by the police forces against the general public, have brought to the fore the blatant violation of human rights that is taking place at the hands of these forces across the country.

There are videos in which people are being lathi charged for coming out on the roads in order to procure essential goods for sustenance. In other videos, migrant workers, who have no option but to walk back to their villages due to the suspension of public transport, are being punished by performing humiliating acts such as sit-ups and crawling on the roads. Vegetable vendors are being slapped and their carts are being overturned. Even doctors and journalists have not been spared, despite discharging essential services as per the MHA Guidelines.

A policeman removes air from the tyre of a labourer carrying vegetables in Delhi, India to dissuade people from crowding outside a market during a 21-day nationwide lockdown. #Lockdown21

UNJUSTIFIED AND EXCESSIVE USE OF VIOLENCE


In a judgement pronounced on 25th March, 2020 by the Kerala High Court in a Suo Moto writ petition regarding COVID-19, it was noted that “right of personal liberty guaranteed under Article 21 of the Constitution of India should not, at any rate, be infringed by arresting an accused, except in matters where arrest is inevitable.” The High Court went on to grant the State the liberty to take appropriate decisions with regard to heinous/serious offences, however, there was a clear emphasis on the observation that arresting an individual was not to be taken as the norm.

Drastic measures have been taken to flatten the curve of COVID-19 and are very much required. Nationwide lockdowns have been instituted in many countries to prevent possible vectors from infecting others. However, the seriousness of the crisis that faces us cannot justify the disproportionate force that is being meted out. In majority of the cases, there is little to no opposition from the alleged violators who are well within their rights to venture out of their homes to get essential goods. Therefore, humiliating these people and beating them is not only reprehensibly excessive, but also unjustified, no matter the intention of the police force.

It is clear that the usage of brute force on behalf of the police officers does not stem from Section 188 of the IPC; hence, it can be safely discerned that the same is unjustified and excessive. Maintenance of law and order is the basic duty of the police; overstepping the parameters set by statutes is downright illegal. Justifying the same on the grounds of possible human right violations of potential victims of the virus is also a moot point as the videos blatantly display that the situation requiring social distancing is made worse by police intervention. There is also minimal effort on behalf of the police to differentiate between actual flouters and those who have stepped outside their homes to access essential services.

In the case of Francis Coralie Mulling v. The Administrator, Union Territory of Delhi & Ors. [1981 AIR 746], it had been stipulated that even a prisoner or a detenu has access to “all the fundamental rights and other legal rights available to a free person, save those which are incapable of enjoyment by reason of incarceration”. It is axiomatic that right to life includes right to personal dignity as well.

The current situation on ground paints a picture of how the civil liberties of the common man/woman are being curtailed without any statutory basis and in contravention to the fundamental rights enumerated in our Constitution.

APPLICATION OF BRUTE FORCE ON WEAKER SECTIONS OF SOCIETY

In 1980s, there were two decisions taken by the Supreme Court of the United States – Tennessee v. Garner (1985) and Graham v. Connor [(490) US 386 (1989)], which had set up a framework to determine when deadly force by police was reasonable. It was observed that deadly force could be used under two circumstances: 1. For self defence, and 2. To prevent a suspect from escaping and poses a dangerous threat to others. In the Tennessee case, the Tennesse statute had been declared unconstitutional as it authorized use of deadly force. In the Graham case, it had been held that claims of use of excessive force were to be analysed under Fourth Amendment of the United States Constitution.

A quick glance across the videos displaying the violence paints the picture that most of the victims of such brute force have neither retaliated against the police, nor made an attempt to flee their circumstances. While making this observation, it is also evident that the majority, if not all, of the victims, belong to the weaker sections of society.

While the police force does indeed have the authority to use force and legal action so as to prevent violation of law, the recipients of such force, i.e. the weaker sections, shed a light on the skewed dynamics of power play involved in ensuring adherence of the lockdown. One video shows an incident in Badaun where policemen made people who were walking towards their native places, crawl with their bags as a punishment for violating lockdown. Even those dispensing the essential services, such as food delivery executives, have not been spared.

The violence inflicted is a display of perverse power and is a moral blot on the canvas of democracy. Such misconduct and abuse of power erodes the faith one reposes in police authorities to protect law-abiding citizens. However, with the law-abiding citizens themselves becoming the victims of the police brutality, it is creating a situation which has the tendency to spark a panic in this incendiary atmosphere.

Instead of helping to facilitate the smoother functioning and implementation of the lockdown, these incidents are only making matters worse by exhibiting utter disregard of the police for accountability and ethics of their profession, and affinity toward exploiting the poor for their own satisfaction. An Enquiry Committee needs to be set up to look into these incidents of police brutality immediately. Simultaneously, the Central and State Governments need to ensure that all police personnel are made aware of the limits of the statutory provisions as well as the conditions set under the MHA Guidelines.

The fear of being at the receiving end of such arbitrary violence for merely stepping out to procure essential goods has compounded the fear arising from the exponential rise in the number of Coronavirus cases in the country and the uncertainty revolving around the term of the lockdown as well as accessibility to essential goods.

At a time when the Central and State authorities must work in tandem to assuage public sentiments and ensure containment of COVID-19, the behavior of the police has ended up creating a panic which could lead to people hoarding goods or resorting to unscrupulous methods to obtain the same. It is also completely contradictory to the principle of social distancing and is evidently making the situation even more dire. While no one is refuting the burden on the police forces to perform their duty on such a large scale at the risk of catching the virus themselves, it still fails to justify the arbitrary and excessive state violence.

The incidents which have taken place are clear cut cases of police excesses. Lack of admonishment from our political leaders is basically tacit approval and allows for the gross abuse of power to continue unabated. Therefore, despite the restricted functioning of the Supreme Court of India and other High Courts, there is a need for the higher echelons of authority to suo motu take up the cause of rampant police brutality and formulate guidelines for the conduct of law enforcement agencies during lockdowns of this nature. Public compliance cannot be obtained with violence and in order to combat COVID-19 successfully, a reversal of the adversarial relationship between the police and the public is the need of the hour.

Source: No Justification For Police Brutality Against Persons …